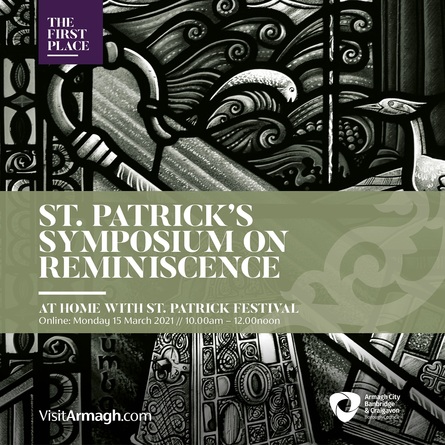 “This is why I have long thought to write, but up to now I have hesitated, because I feared what people would say”

St Patrick's Confessio
After the extremely positive impacts of previous symposia examining the themes of modern slavery, migration and peace-making within a modern context, 2021’s Symposium will be exploring the theme of reminiscence – its importance in society, its healing power, its intrinsic dangers and its restorative capacity.
Contributors include Jo Berry, Prof Brandon Hamber, Nandi Jolie, Seán Hewitt & Anthony Toner.
The host for the morning is broadcaster Karen Patterson.
This event will take place via Zoom, which can be downloaded, for free, on Windows, MAC OS, iOS and Android. Further details can be found at https://zoom.us
Jo Berry

Jo Berry works to resolve conflict. Sixteen years after
her father was killed by an IRA bomb, Jo met the man responsible, Patrick
Magee. This initial meeting led to them sharing a platform together
internationally, on over three hundred occasions.

Through her charity ‘Building Bridges for Peace,’ Jo
demonstrates how empathy can resolve and end conflict, by delivering workshops to
young people on conflict transformation, positive change making, and
challenging violent extremism.  Jo is an advocate for Restorative Justice,
and a Restorative Justice facilitator.

Professor Brandon Hamber is the John Hume
and Thomas P. O’Neill Chair in Peace at Ulster University based at the
International Conflict Research Institute (INCORE). He is also a member of the
Transitional Justice Institute.  He trained as a Clinical Psychologist in
South Africa. He has undertaken consulting and research work, and participated
in various peace and reconciliation initiatives in Northern Ireland, South
Africa, Liberia, Mozambique, Bosnia, Colombia, the Basque Country and Sierra
Leone, among others.

Seán Hewitt is a poet, lecturer and literary critic. His
debut collection, Tongues of Fire (Cape, 2020), was
shortlisted for The Sunday Times Young Writer of the Year Award. In 2019, he
won an Eric Gregory Award, and he is also the winner of the Resurgence Prize,
2017. His memoir, All Down Darkness Wide, will be published in
2022.

Nandi is originally from South Africa has been active in
the NI arts community as a writer, artist and facilitator. She has been
involved with the Irish Writers Centre XBorders project; Same/Difference
project and Poetry Jukebox. Nandi managed the ‘Home neither here nor there’
exhibition at Stormont in May 2013. Nandi's show opened the International
Literature Festival in Dublin in October 2020.
https://quotidian.ie

Famed for his
engaging between-songs patter and his accomplished guitar playing, Anthony
Toner is one of Northern Ireland’s most popular live acts, chalking up dozens
of live shows a year as a solo acoustic artist.