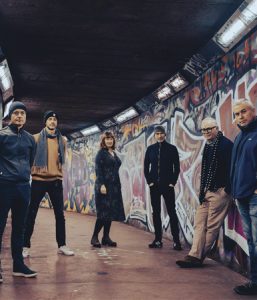 Brian Finnegan & The Hunger Of The Skin

One year after the triumphant launch of ‘Hunger Of The Skin’ in Market Place Theatre, Brian Finnegan makes a thrilling return to his hometown with the hard hitting, ‘Hunger of the Skin Band’. Voted ‘FolkWorld, Album Of The Year 2021’, ‘Hunger’ has been brought to life at some of the world’s biggest festivals in 2022, garnering a 5-star review in The Times.

Brian is a celebrated composer, collaborator and producer and has toured and recorded with artistes as diverse as KAN, Cara Dillon, Boris Grebenshikov, Anoushka Shankar, Bebel Gilberto and most recently with Ed Sheeran on his Divide

album. A past pupil of the fabled institution, The Armagh Piper’s Club, and frontman with the dazzling group Flook, Brian’s music is forged from the tradition he grew up in, and his fearlessly inventive approach to composition and arrangement.

The ‘Hunger of the Skin Band’ is his storm-force new quintet, featuring Brian Finnegan on whistle/flute, Seán Óg Graham on guitar, Liam Bradley on drums, Danny Bert on percussion and drums, Conor McCreanor on bass.