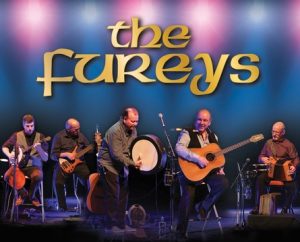 The Fureys are one of Ireland’s all-time most acclaimed and influential folk, traditional and middle of the road bands. Fureys classics, I Will Love You, When You Were Sweet 16, Red Rose Café, Leaving Nancy, The Old Man, From Clare to Here and The Green Fields of France have become the soundtrack to the lives of fans all over the world.

The Fureys’ indelible musical footprint is rivalled only by their vast collection of personal stories of their musical experiences and friendships, gathered by Eddie and George Furey along an amazing 45-year journey which shows no signs of reaching a final destination.

The Furey brothers were still trying to make it as folk singers in the late Sixties when Eddie Furey shared flats with then fellow folk stars-in-waiting, Billy Connolly and Gerry Rafferty.

Eddie recalls:”It was quite a group to be living under the same roof and we had great fun. I bet the neighbours never slept with all the singing and drinking.”

Eddie and George Furey are particularly proud of their UK chart success with songs like I Will Love You and When You Were Sweet Sixteen, which in turn helped bring Irish folk and traditional music to a completely new audience. The band made their Top of the Pops debut in 1981.