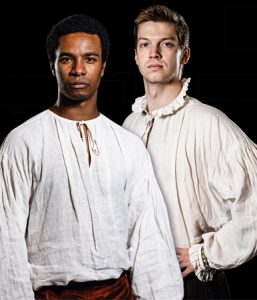 In the late 15th century, John Blanke, a young black musician of exceptional talent left the ancient city of Granada and made his way to the court of Henry VII of England. There he forged a surprising musical bond with the child who would become the infamous Henry VIII.

These two extraordinary young men scramble their way to adulthood full of feeling, often outrageously funny, as they try to figure out love, sex, politics, and what it means to be a man.

Performed by two outstanding young actors, who effortlessly create all the characters of their Tudor world, ‘The Trumpet & The King’ is a play about music, belonging and friendship across religious and cultural divides, which will draw you effortlessly into the dramatic world of the early Tudors.