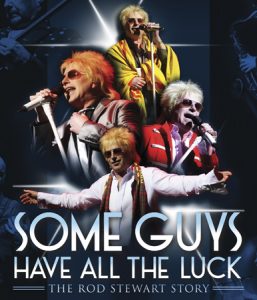 Endorsed by Rod’s own family, ‘Some Guys Have All The Luck – The Rod Stewart Story’ is back in 2023 with its hotly-anticipated new production.

Direct from The West End, the show brings to the stage an incredible live concert celebrating one of rock music’s most influential icons, Rod Stewart, and takes you on a musical journey that spans six decades from his humble beginnings in the R ‘n B clubs of the 1960’s, to world-famous rock sensation.

Widely acknowledged as the UK’s best, frontman Paul Metcalfe is breath-taking as Rod and captures all the excitement, energy and charisma of the legendary performer including the phenomenal vocals, infamous moves and swaggering showmanship that have made Rod one of the most successful artists of all time.

“I've seen some ‘Rods’ in my time, but Paul is the best one I've ever seen.” Don Stewart [Rod Stewart’s brother]