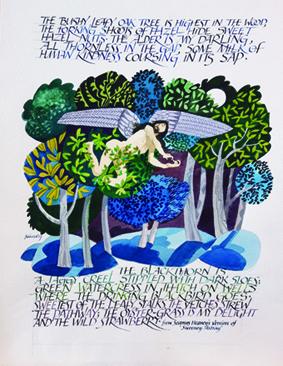 Northern Ireland born international artist Desmond Kinney is best known for his revival of the technique of working with mosaics, through various large-scale murals and public art works mainly focused on Irish myths and legends. In the 1980’s he started illustrated calligraphy, working on Seamus Heaney’s translation Sweeney Astray, creating paintings in the medium of watercolour. The Home of Saint Patrick Festival 2020 and The Market Place Gallery are delighted to exhibit sixteen of Kinney’s stunning illustrations which have never been exhibited publicly before.

Buile Shuibhne, in English ‘The Madness of Sweeney’, is an old Irish myth immortalised in verse composed during the 12th Century. It tells the story of Sweeney, King of the Dál nAraidi, who commits violent acts against St. Ronan Finn and his monks, and is cursed to wander naked around Ireland. Sweeney is driven mad by the curse, becoming a wildman living in forests and wilderness and at one point grows feathers like a bird.

The poem inspired many writers, including Seamus Heaney, who made his own translation of it, published in 1984. Heaney’s friend, artist Desmond Kinney, enamoured by the work, turned it into a series of watercolours featuring his personalised calligraphy [a medium he had trained in as a student], and illustrated vignettes of the mad king living in trees, existing wild and unkempt, a tormented soul.

The paintings are highly idiosyncratic, redolent of medieval manuscripts, yet also contemporary in their graphic composition.

Desmond Kinney also transformed the Buile Shuibhne into a large mosaic frieze which is situated at the University of Limerick. The mosaic made in Venetian vitrious glass features quotations from Seamus Heaney’s text. The poet and the painter remained lifelong friends.