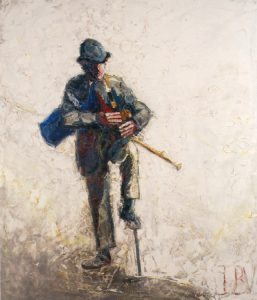 ‘Vallely at 80’ is a major retrospective by international and award-winning artist JB Vallely. The artist will revisit drawings and oil paintings spanning almost 63 years as well as showcase new work completed during his 80th year.

This is Vallely’s most extensive solo exhibition since his major retrospective at the Market Place Gallery, in his birth city of Armagh in 2000. This exhibition includes his collection on display in the Archbishop’s Palace, Armagh that covers most of Vallely’ s life as a painter along with his collection of religious pieces on permanent display at Benburb Priory, dating from the early to mid-1960’s.

Valley’s subject matter depicts rural Irish themes, including its strong traditions of which he is passionate about on a personal level.  Music, sport, mythology, history and culture feature predominantly in his paintings. He has produced a vast number of pieces over his career, exhibiting regularly at galleries in Belfast, Dublin, Derry and Armagh with additional exhibitions in Italy, Wexford, London, Scotland and Galway.

‘Vallely at 80’ can be viewed at three locations across Armagh, with new works and the artist’s private collection exhibited at the Market Place Gallery. Entry FREE.