The Birth Of The Orange Order

‘Come and sit by the fire’. It’s the perfect way to start a story and Hilda Winter is a master storyteller [and the baker of a famous Armagh apple tart, which you can taste here]. Nor could you wish for a more atmospheric setting, sitting before the old hearth which dominates the front room of this mud-walled 18th century thatched cottage.

So, settle before the crackling logs on the hearth and let Hilda’s story transport you all the way back to 1795. It is not difficult. For this cottage, and the idyllic farmland around it, has changed little since that time. And through the window of this front room you can see the same hilly, wooded terrain where one of the shortest, yet most significant, conflicts in Irish history took place.

‘It was a terrible time’, Hilda says. For several years Catholic and Protestant militias, known as ‘Defenders’ and “Peep o’ Day Boys’, clashed around Armagh and Tyrone – homes were wrecked, arms stolen, people attacked. “You weren’t safe on the roads, if you went to market or to a fair you went in a group for safety.” 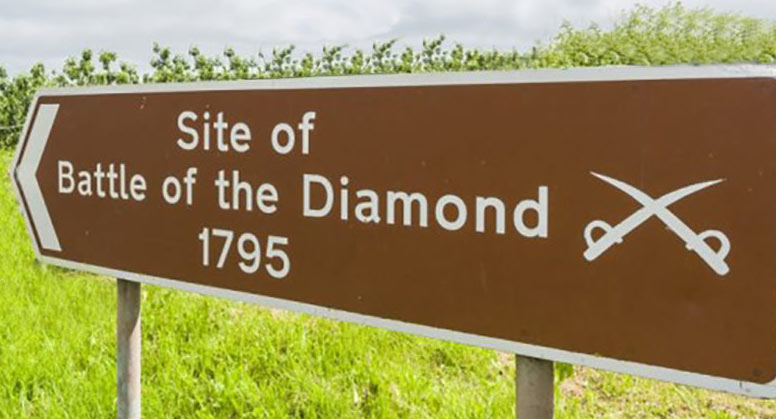 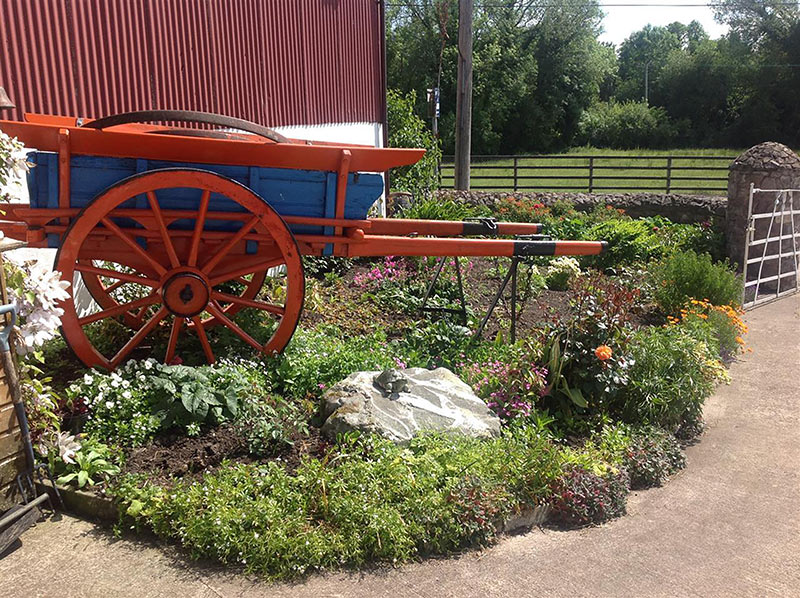 Then, in September 1795, the conflict came to the Diamond, a townland halfway between Loughall and Portadown. Increasing numbers of Defenders and Peep o’ Day Boys’ gathered in the area. On Friday, September 18th, a truce, organised by local Protestant landlords and three priests, was announced. A surety of £500, a fortune in those days, was pledged should the truce be broken.

The uneasy stand-off continued over the weekend, with the Defenders occupying Faughert Hill and the Peep o’ Day Boys gathering on Diamond Hill, behind Dan Winter’s cottage.  In the early hours of Monday morning, the simmering tension finally exploded. 300 Defenders made their way towards Dan Winter’s grocer’s  shop, intent on destroying it. Inside, Winter and his sons returned fire but a flaming torch was thrown at the thatched roof, setting it ablaze, and the Winter family made their escape.

Hilda points out the battlefield just across the road, surely no different today then when hundreds of men, some carrying pikes, others armed with muskets, clashed in bitter conflict. The battle was short and one sided with accounts suggesting anything from 16 to 60 Defenders perishing and no casualties on the other side, partly the result of the advantageous positioning of the Peep o’ Day Boys at the top of the hill.

Hilda now walks into the far room of the little cottage. After the battle ended a few men, including Dan Winter, James Sloan, who owned an inn in nearby Loughall, and James Wilson of the Dyan in County Tyrone, met here to urgently discuss a long term solution to the enduring conflict.

Hilda points to the chair where one of these men sat as they debated what would become the formation of an organisation dedicated to defending Protestants. It would become known as the Orange Order and would play a huge part in the ensuing events that would help shape the island of Ireland.

But that is for another story, for the men decided it was too dangerous to remain at the cottage and Wilson and Sloan journeyed to Sloan’s Inn in Loughall, where they met a Captain of the Dublin Militia to help further their aims.

You too may continue this story at Sloan’s House, just a few minutes drive away. 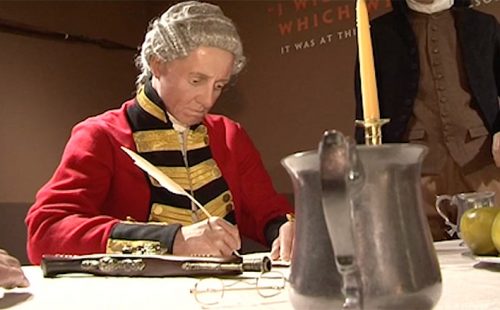 In September 1795, the conflict came to the Diamond, a townland halfway between Loughall and Portadown.