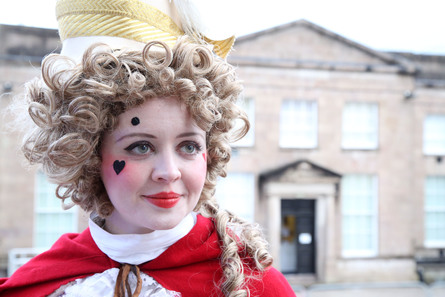 A whopping 25,000-strong crowd celebrated the official countdown to Christmas in Armagh this weekend as the traditional Georgian Day celebrations got under way in the historic city. The event, inspired by ArmaghÕs unique and historic Georgian cityscape, was the largest-ever festival event to be held in Armagh, and included a packed-out, day-long schedule of family-fun events, including horse and carriage rides, traditional singers, food and craft stalls, the new ChildrenÕs Christmas Market, and the famous Georgian Day Light Show.

Charlotte McReynolds during the Georgian Day celebrations in Armagh.

A Top Turnout for Historic Georgian Day celebrations in Armagh

Armagh sparkles with traditional festive family fun as more than 25,000 visitors flock to the city

A whopping 25,000-strong crowd celebrated the official countdown to Christmas in Armagh this weekend as the traditional Georgian Day celebrations got under way in the historic city. The event was the largest-ever festival event to be held in Armagh.

The annual extravaganza, one of IrelandÕs largest festivals, and inspired by ArmaghÕs unique and historic Georgian cityscape, saw the city transformed into a seasonal winter wonderland. The highlight of the packed-out, day-long schedule of family-fun events was the famous Georgian Day Light Show, ÔTÕwas the Light before ChristmasÕ, at the city’s iconic Market House, which brought the centuries-old building to life with a spectacular animated performance.

Throughout the day, more than 70 festive stalls had lined the city streets offering locally produced food, drinks and high quality gifts, while Georgian gentry strolled the cobbled streets and stallholders served customers in traditional Georgian outfits against a backdrop of Christmas music and entertainment from local singers. New for the 2015 event was the ChildrenÕs Market atÊthe Shambles Yard, which was home to an amazing array of festive fun including a fantastic range of family-friendly experiences including a carousel, real reindeer, fairground games, crafts, stalls and even a kidsÕ disco!

Lord Mayor of Armagh, Banbridge and Craigavon, Darryn Causby, said the event was a perfect start to the Festive season for the many thousands of people who enjoyed the celebrations;

ÒArmaghÕs annual Georgian Day event has been attracting record numbers of visitors to the city for more than a decade, and this year is no exception. We are delighted that so many people came to experience the magic and atmosphere of this thrilling event which is one of the highlights of the city’s calendar of events.

“For many families, the Georgian Day celebrations mark the official countdown to Christmas and the atmosphere, activities and fun of this unrivalled event put all our visitors in the festive spirit with the magic of Christmas celebrated in traditional Georgian style.”

While Georgian Day marks the start of Christmas in the city, there are still more experiences to come over the next few weeks with Santa and his elves welcoming children of all ages to Navan Centre and FortÊfrom Saturday, December 5th, while also allowing them a sneak peek inside his workshop at McCrumÕs Court.Ê

Little Red Riding Hood will be providing unforgettable festive funÊfrom December 4thÊat the Market Place Theatre, while the Armagh Planetarium will be journeying back over 2,000 years to Bethlehem, to discover a scientific explanation for the star the Wise Men followed to find the baby Jesus, in the digital theatre show ÔMystery of the Christmas Star’ in a modern re-telling of the Christmas story that will charm and captivate all ages.