The August sun beats down on a crowd of several thousand gathered on a back road not a mile from the centre of Armagh.

Their eyes are focused on a figure over a hundred yards back. The man thunders forward, winds his arm around frantically and powers an iron ball at some 80 miles per hour towards them. This is nearly as fast as a baseball is hurled towards a batter but at 28 ounces (nearly 800 grams), the iron ball is over five times heavier, so the feat is far greater.

The crowd, understandably, scatter, those at the back taking their cue from those at the front. The ball (known as a bullet in Armagh) eventually lands and its position on the road is marked with chalk.

Under the rules of Bol Chumann na hÉireann, the Irish Road Bowling Association, whoever reaches the end of this course with the least throws will win this titanic contest between the local Ulster champion from Armagh and his rival from Cork and become All-Ireland Champion. In the counties of Cork and Armagh that is the equivalent of the Superbowl or the World Cup Final! 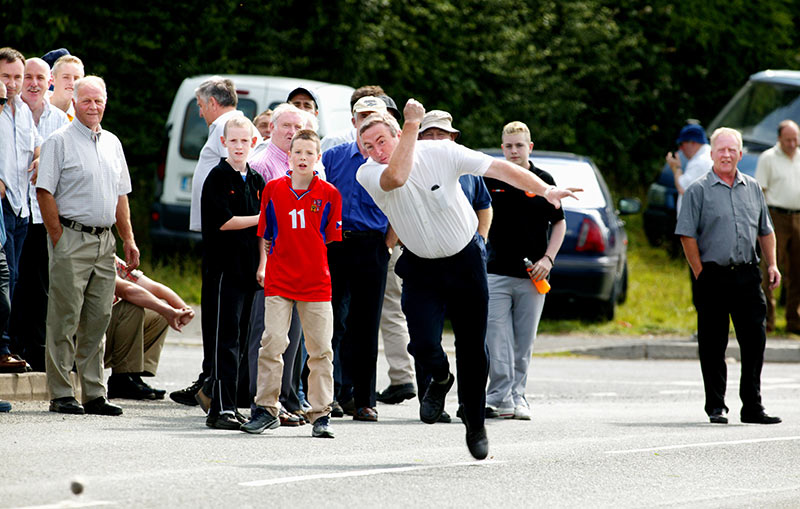 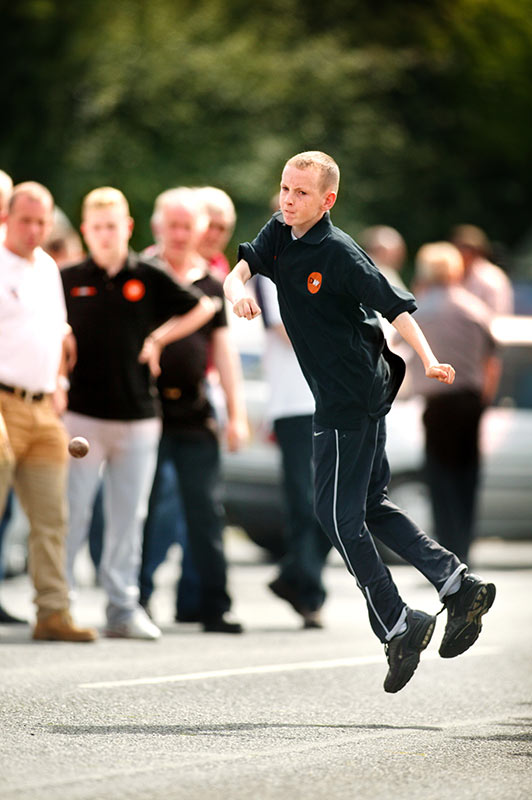 Although this championship was only introduced in 1963, the sport goes back many centuries and probably originated in Armagh. While its origins go back much further, it has been suggested that the rules were influenced by north of England linen workers in the early years of Plantation, though such heresy is firmly rejected locally.

Road bowling was listed as a national Irish pastime back in the 1880s and placed alongside Gaelic football and hurling in national importance but in more recent times it has been mainly played in the counties of Armagh and Cork.

Although this is a sport for everyone – it is free to watch and there is no expensive uniform to lash out on – and there is no formal training, the skill levels are high. Local teams emerge from small townlands and villages, often with extended families at their core. Then there are regional teams and the really talented go on to the national team.

They play in all weathers, including lashing rain and heavy snow, only failing light preventing a contest. Youths, women and veterans all have their teams and, gradually, the sport is returning to its golden age of popularity as numbers grow year on year.

The great champions are venerated locally like the legends of soccer. They speak in awe of Armagh’s Danny McParland and his four All-Ireland wins, including the first in 1963, and Joe McVeigh’s record throws in 1955 on the Cathedral Road course in Armagh City.

People still talk about the famous loft (a throw that goes higher than normal) in the 1964 final when Cork’s Mick Barry hurled the ball around a corner in the road, clearing a pub, television aerial and telephone wires and landed nearly 100 yards away. That contest, narrowly won by McParland, was watched by an estimated 15,000 people!

Road bowling was listed as a national Irish pastime back in the 1880s and placed alongside Gaelic football and hurling in national importance but in more recent times it has been mainly played in the counties of Armagh and Cork.

The great rivalry is no longer just between Cork and Armagh. There are world and European championships every four years and the Germans, Italians, Dutch and Americans, all who have slightly different variations in their rules, are proving strong opponents to the Irish.

Intrigued?  Nobody conjures up the power and athletic grace of the sport better than Armagh’s acclaimed painter JB Vallely, whose exhibition can be seen at the Bishop’s Palace.  Even better, why not witness a game yourself and enjoy unrivalled craic as well. On many summer days you will find a fiercely contested game to watch on several roads leading out of Armagh. Call Tony Hughes on 07510 816721 to confirm places and dates. You’ll be very welcome. Just make sure to look out for those speeding bullets! 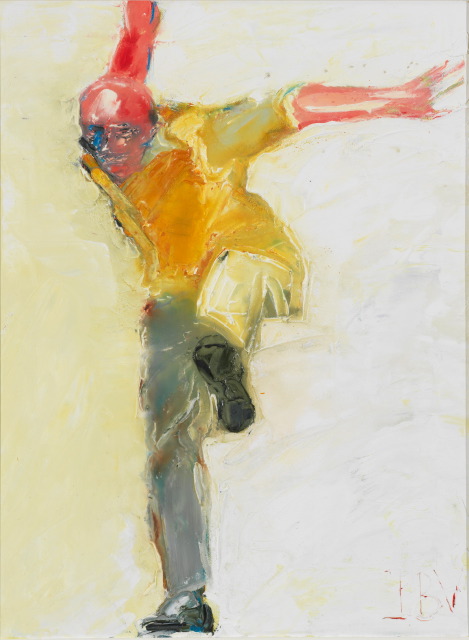