JB Vallely - The Soul Of Armagh

As you explore the dramatic vista of colour, form and movement of the paintings that grace the walls of the Georgian Bishops Palace, think of their creator as your guide to the soul of Armagh.

As the great Kings of Ulster, in nearby Emain Macha [Navan Fort], employed bards to reflect their world in verse so JB [Brian] Vallely, the Palace’s ‘Artist In Residence’, takes us deep into the heart of Armagh’s culture, traditions and history.

From the heroic death of mythical warrior Cuchulainn to the road bowler about to ‘unleash’ his bullet to the accordionist so wrapt in his music he becomes an extension of his instrument, joined in a ‘swaggering jig’ by fiddlers and pipers, here is the key to unlock the magical world around you.

Vallely is the master of these scenes because they are part of him. 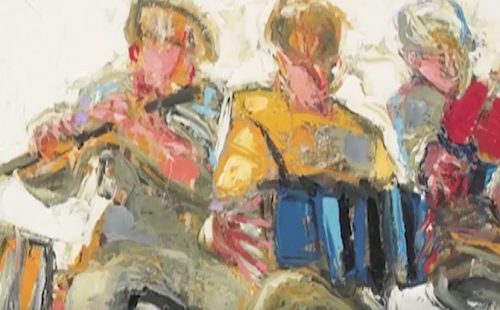 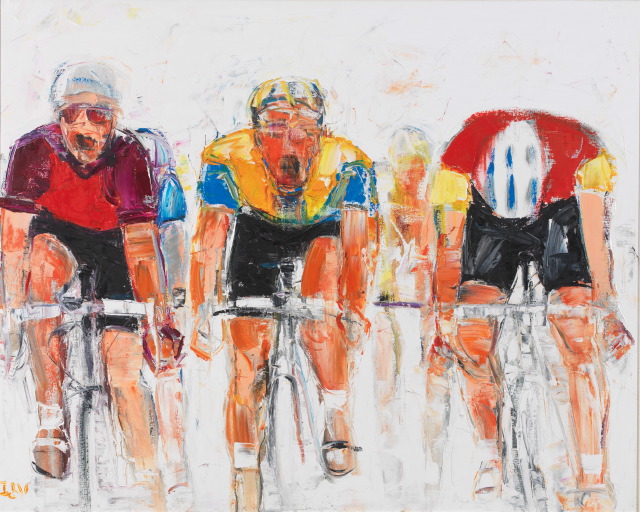 Or it could be the runners flowing across the Armagh countryside, set dancers moving in tandem to the music, cyclists bent in desperate battle as they race for the line [to celebrate the famous Giro D’Italia coming to Armagh] or his retelling of the Battle of the Ford, a vital local conflict learnt as a child from his father’s vivid description.

Vallely is the master of these scenes because they are part of him. Growing up in the beautiful County Armagh countryside, he took up the flute and then became ‘besotted’ by the pipes, founding the Armagh Pipers Club in 1966. He is passionate about athletics and cycling too and his love of Irish mythology shines in his paintings. He first made an impact on the art scene when eight of his works were chosen for the World Fair in New York in 1963. Today, he is recognised internationally as one of Ireland’s finest artists.

JB Vallely at the Palace Exhibition

Note: Some paintings also on exhibition at the Market Place Theatre.