The story of the building of St Patrick’s Cathedral (RC), Armagh

St Patrick and several of his followers were marking out the site of his stone church, where the Church of Ireland St Patrick’s Cathedral stands today. Suddenly, they disturbed a doe, which ran away, leaving her fawn behind. Patrick picked up the fawn, walked down the hill, over a little valley and up the adjacent hill (Armagh, like Rome, was founded on seven hills).

Stopping there to release the fawn, whose following mother retrieved it, it is said he announced to his followers that one day a great church would stand on this site.

Fast forward from the 5th century to 1835. Archbishop William Crolly is appointed to Armagh. Daniel O’Connell’s Emancipation Act has been passed and centuries of anti-Catholic laws, including many of the severe Penal Laws, have been lifted. Archbishop Crolly will become the first Catholic Archbishop to reside in Armagh for almost 300 years.

To mark the changing of the times he will make an even more dramatic statement. On the site identified by St Patrick (as documented in the 9th century Book of Armagh) he will re-establish the Catholic Church as a force, not just in Armagh but throughout Ireland, building a cathedral whose magnificence will match that of its Church of Ireland neighbour.

It is a genuine leap of faith. The money needed to match the Archbishop’s vision is considerable and the Catholic population of the city is not wealthy. But he will find many generous donors among the Protestants of Armagh, not least the Earl of Dartrey who leases him the site identified by Patrick hundreds of years before. The foundation stone is laid, fittingly, on St Patrick’s Day, 1840.

The ecclesiastical capital of Ireland since Patrick founded the city, Armagh will now truly become the centre of Christianity in Ireland and its many Catholics will again feel their connection with Patrick. 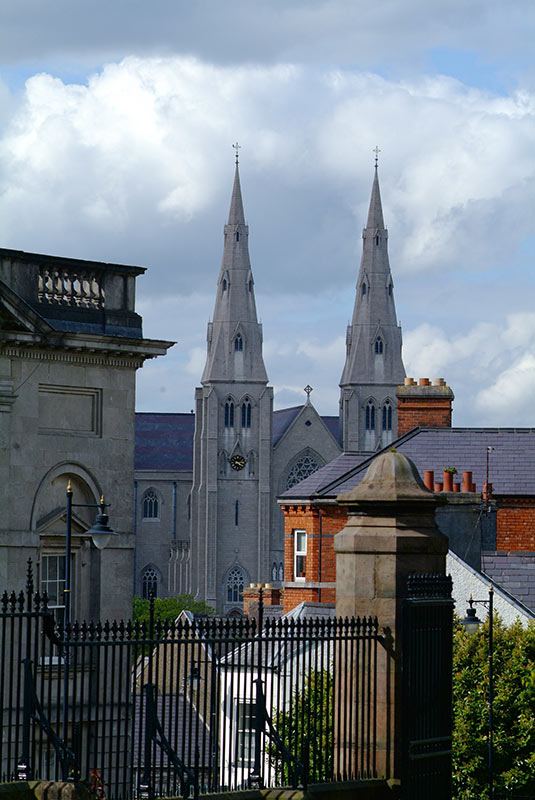 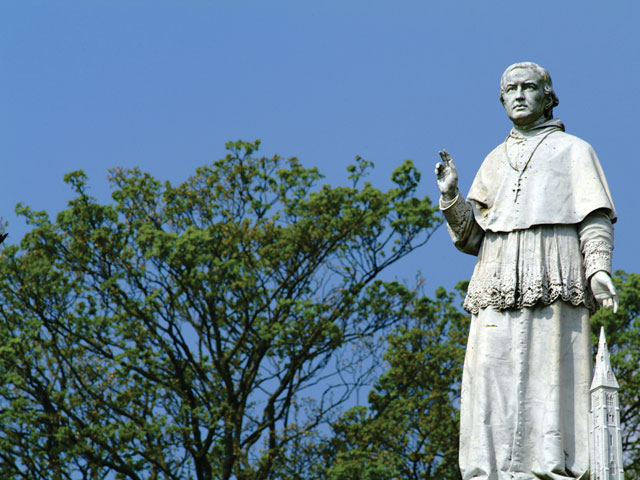 But in 1847, as the Great Famine ravages Ireland, Archbishop Crolly stops the building of the cathedral and gives all the money he has raised towards the relief of the suffering. His work amongst them will also cause his early death from the rampant cholera that accompanies famine. His funeral brings thousands of all denominations to Armagh.

The building of the cathedral does not resume until 1854, with a new architect and a new design.

Gone is the Gothic style of the original as a more contemporary look is created. The entrance is moved from the north transept to the west, leading to the creation of the famous twin spires. The roof is raised by twenty feet, creating the awesome sense of space today’s visitors experience.

At a bazaar in 1865 to raise funds for the building, many famous people donate artefacts. The pope sends an ivory carving of the Madonna, Napoleon III of France a pair of antique Sevres vases and the Emperor of Austria some inlaid tables.

The ecclesiastical capital of Ireland since Patrick founded the city, Armagh will now truly become the centre of Christianity in Ireland and its many Catholics will again feel their connection with Patrick.

Finally, in 1873, the cathedral is finished and over 20,000 people attend the opening, a huge number in the days before motorised transport. There have been changes since, not least when Cardinal Michael Logue was appointed Archbishop of Armagh.

Believing the cathedral should reflect his status as cardinal, Archbishop Logue took his architect to Italy to visit the marble quarries and brought in Italian craftsmen to work on beautiful mosaics and sumptuous marble altars.

Sadly, in later years, some of Logue’s introductions, including all but one of the marble altars and the inlaid marble floor, were removed or destroyed. A new, beautifully carved altar of Tunisian limestone, inspired by the figures on early Irish crosses, went some way to restoring its reputation. Other highlights include a beautiful crucifix by German artist Imogen Stuart, an original marble altar which can be found in the Blessed Sacrament chapel and striking stained glass windows of St Patrick, as well as five cardinal hats which hang from the ceiling.

One of the famous spires houses the Great Bell of St Patrick, the other has a unique set of Carillon bells. One of the few able to play these bells is Baron George Minne, the very talented organist at St Patrick’s for over 50 years. He is only the Cathedral’s second organist since 1904!

It is little wonder that huge numbers of visitors make their way to St Patrick’s. These include many faith groups who often bring their own priest to celebrate mass at the centre of Irish Catholicism.

All who come pay their respects to the man whose dream was finally realised, decades after his death. A brass plaque dedicated to Archbishop Crolly can be found in the steps of the new sanctuary, beneath the Tunisian altar. 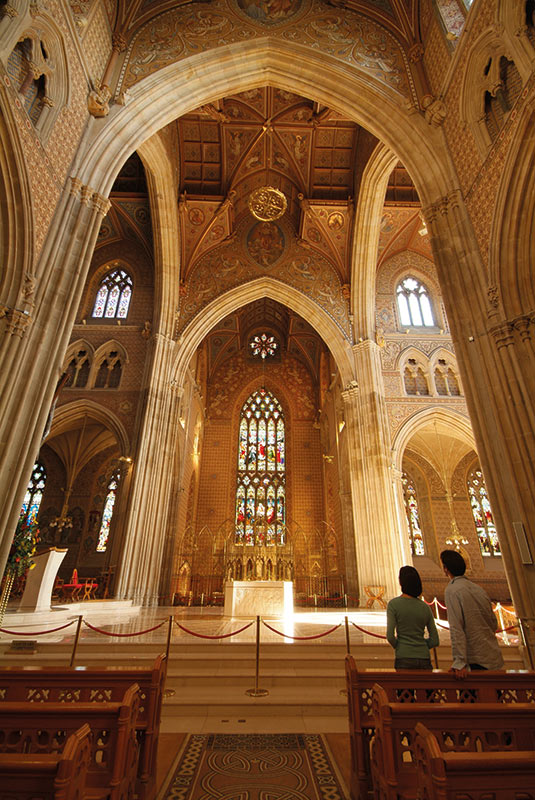